THE CONCLUDING CHAPTER OF CRAWFORD
© All original Joan Crawford research and original text herein is property of Webmaster Bryan Johnson and is copyright protected by the United States Copyright Act of 1976. Copyright © Bryan Johnson
Articles

Joan considered the query and replied slowly, “Some of them probably would not. I doubt that Garbo could, not being raised the way she was, not with her background. She’s really a lovely human being, I think-but she began to believe her own publicity and the words that Ralph Wheelwright (MGM Publicity Director) put in her mouth. With her ‘I want to be alone’ attitude, I doubt that she’d survive today. In the old days, we were so protected, the studios did everything to help us.”
Bob Ferguson agreed, “Yes, it’s totally different today. Nobody has to protect young stars the way they once did. If there’s a scandal, the stars don’t seem to care and the public is not offended. So they don’t need it.”
We had an animated discussion then of the behavior of performers during the last decade, the alliances sans marriage (“They don’t seem to want it,” observed Joan), the single mothers, etc. An everyone agreed that it is quite a change from Hollywood during its Golden Days.
“A change for the better is that there are a number of black stars today,” Joan observed. “Bill Cosby, for example, is one of the greatest. I think he’s superb. So is Sidney Poitier. And I caught a segment of BONANZA recently and Rupert Crosse walked away with all the scenes he was in.”
At this point I wondered: “How successful are stars in directing themselves in terms of box office success? What about Paul Newman, Jack Nicholson, Barbara Loden?”
​
“Has anyone seen WANDA, which she directed?” asked Joan.
​
” Yes, I have,” answered Bud Goodman. “It’s an incredible movie.”
​
“Good direction?” pursued Joan. As Bud nodded, Joan continued, “Well, she’s married to Kazan and I’m sure it’s been a help. I just read an interview with her and she speaks so intelligently about her work.”
​
Bob Ferguson noted that “more and more stars are trying directing. Sometimes I think it’s risky to let an actor direct himself. Of course, Jerry Lewis has done it successfully for years. And in the old days, Chaplin and Orson Welles directed all their films.”
“Nobody did it as well as Welles,” Joan commented succinctly.
We spoke of the new Joe Losey film, THE GO-BETWEEN, with Alan Bates and Julie Christie, and of the superb performance of young Dominic Guard.
​I had found the flash-forward technique, the juxtaposition of present and future, confusing and irritating for a while and wondered if different editing couldn’t have made the use of it more comprehensible.
Joan agreed. “Often, producers and directors are so close to a property; they’ve worked on it for weeks and months, read it and re-read it, and they forget that the audience is not as familiar as they are with the plot and motivation. I’ve had to say to them, “You’re too close to it! Please explain it to the audience. Add a scene to bring it together, otherwise you’ll lose the story value.’ “
​
Someone mentioned that Ross Hunter, the producer, had been on Merv Griffin’s show a few nights before. Since he usually specializes in “women’s pictures,” I inquired, “Joan, has Hunter ever asked you to make a film with him?”
Laughing again, she continued, “I read in Shirley Eder’s column that Melina Mercouri once asked him to find her a suitable property, a ‘Joan Crawford-type story’ so that they could make a film together. I said then that if he ever found a Joan Crawford type story, I wanted to do it myself.”
She got up to answer the phone and when she returned we were talking about Liza Minelli. Judy Garland and Joan had been friends and mutual admirers for many years and her face lit up. “Liza is a tremendous talent. I hear she’s absolutely brilliant in CABARET! Do you remember that special she did with Judy a few years ago? I sat there and cried. They balanced each other so beautifully. You know, a lesser actress pulls you down, but their harmony was so perfect, they were so happy together, that it was a joy to behold.”
​
What can young performers today do to endure in the industry?
“Study. Never stop studying,” Joan responded. “Read out loud. Constantly examine the technique of other stars and top directors.
​I try to see all the films I can of a director before I work with him, familiarize myself with his technique and style. This can be invaluable help.
​Performers should prepare themselves as much as possible to take direction properly. In my early days, I learned from everyone-Lon Chaney, Wallace Beery, the Barrymores. All the marvelous actors with whom I was privileged to work.”
What was it like working with John Barrymore in “GRAND HOTEL”?
​
“He scared the life out of me!”
​
And Lionel Barrymore?

​​“He was a darling. I just adored working with him. He was always good to me. We also worked together again in GORGEOUS HUSSY, but that was later and, by then, he was terribly crippled with arthritis and always in such pain. His poor hands were badly swollen, and he was confined to a wheelchair, so whenever he was gruff, I never let it bother me because I knew his arthritis was bothering him. He was a beautiful man and both of them, John & Lionel, were an education to work with.”
​
Bob Ferguson said, “We had a problem with Paul Muni, he was such a great actor, but he didn’t want to do THE LAST ANGRY MAN for us because he was so deaf by then. So, we made him wear an earpiece through which he got all his cues-and he was very happy.”
​
“Sure,” agreed Joan.” “Give an actor a prop to work with, a cape, an earpiece, or whatever, and he’s always happy.”
​
A few moments later, when there was a change of topic to the Broadway stage, Joan said enthusiastically, “Have you seen NO, NO, NANETTE? I adored it. The audience is the show! The minute the overture starts, their faces light up-the youngsters’ as well as adults.’ I went out for a cigarette at intermission and when I walked back in, the audience rose and gave me an ovation. When I sat down, the man behind me said, “If you don’t stand up again those people in the balcony are going to fall right down on our heads!’ So, I stood up again. Then a lady connected with the show came up and said, “The orchestra in the pit can’t see you. Would you walk down the aisle and say ‘hello’ to them, please?’ So, I got another round of applause then, and still another when I went backstage after the performance to congratulate the cast. They were all so marvelous. I had a lovely visit with Ruby (Keeler) and Patsy (Kelly).”
​
It was getting late and we all had dinner engagements, so we began our ‘adieus.’ “I wish Anita Loos could have come today. She’s so much a part of the movies, with her background. And we didn’t get to talk about Frank Capra’s new book. He directed me in practically my very first movie with Harry Langdon, who was so funny, I’d break up laughing every time I had a scene with him,” Joan said as she walked me to the door. It’s always that way when I see her the time flies by and I leave never having gotten around to all the things I planned to discuss. So, we phone each other later and try to finish the conversations. There goes the telephone now."
​
Larry Carr is a music authority and author of the book FOUR FABULOUS FACES published earlier this year by Arlington House. 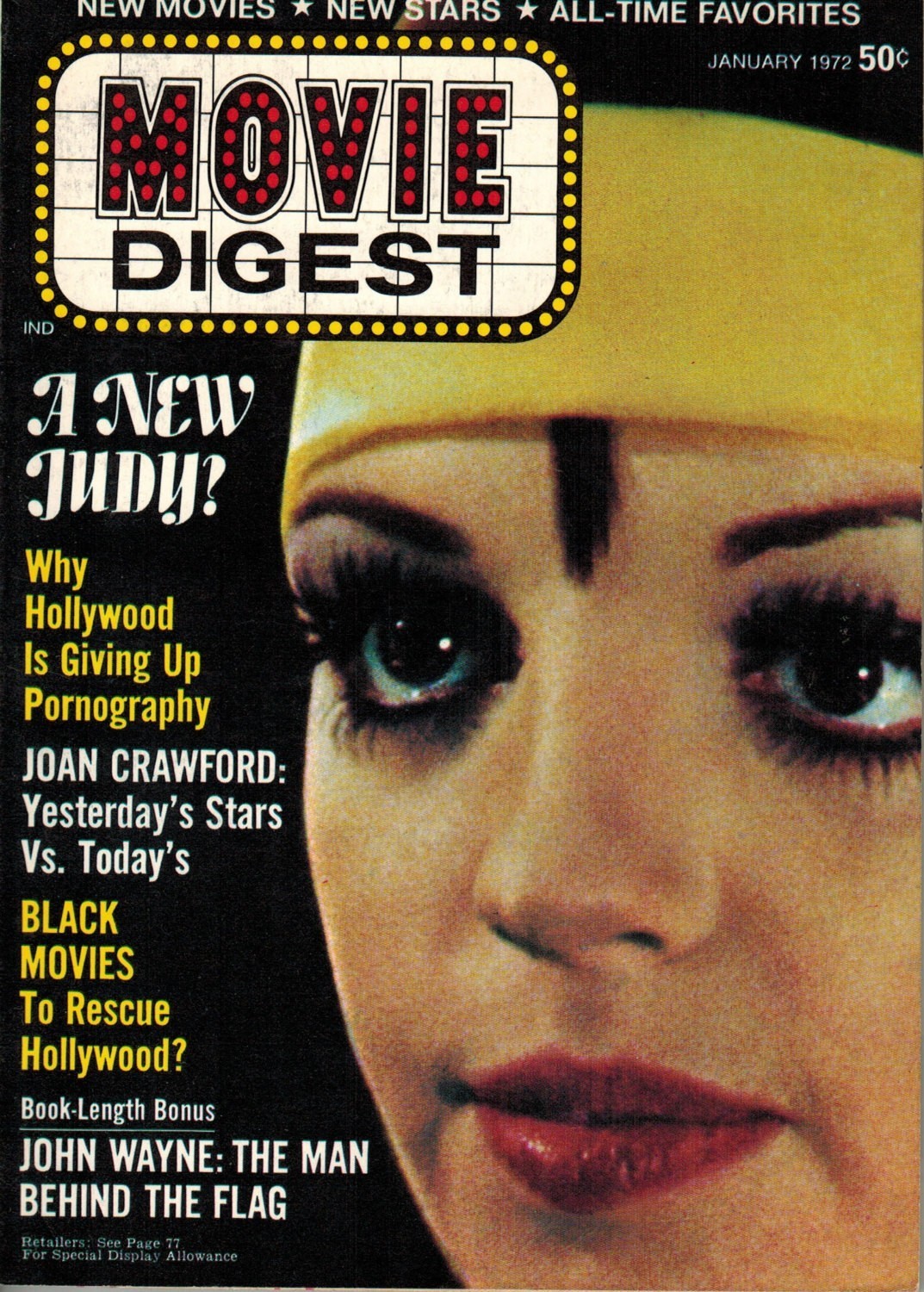