Joan Crawford fan Suzanne Page shares her meeting with Crawford at a "My Way Of Life" book signing in Boston, Massachusetts (November 16th, 1971). (Special thanks to Suzanne for sharing her memories with this website)
​
​     "Bryan, Just came across your website which I think is a remarkable and fabulous compilation of Joan Crawford in her later years which was when I too became enamored of her and her work.
​
On November 16, 1971 Joan Crawford's book signing took place at a store that used to be called "Jordan Marsh" at 2:00 pm. I know this because I was 14 at the time and begged my parents to bring me in which they did for the book signing. I was 14 years old wearing an orange a-line dress lined in faux fur at the collar and cuffs.
My father wanted to bring a camera I begged him not to - a request I regret to this day.
​I was second in a long line of fans to meet Joan behind a very eccentric old woman dressed in a gothic floor-length black dress carrying a dozen roses.
Joan was seated on a raised platform at a table with who I now believe was Christina.

​​I remember this odd old woman in front of me because when she got to Joan, she handed over the red roses, made a deep courtesy and disappeared. She never spoke to her never asked for an autograph just took off. I recall the handlers around Joan thought it was odd and scrambled a bit as well, but they moved the line on to meet her.
Even at 14 years old, I thought that would be a tough act to follow as I began to tremble and was already nervous.​

​Joan stayed at what was formerly the Ritz Carlton on Boston Common, now the Taj where she gave a press conference and I have that clipping somewhere. Very interesting as the reporter noted the room was absolutely frigid at Joan's request and stocked with Pepsi products.
​
When I arrived at the elevated platform where the table was located to meet Joan, I told her that I had many letters from her which now I realize were written by Betty Barker from the West Hollywood address you note on your website and sent to her to be signed in NY then mailed.
​My mother got the address as she sent a letter to Brandeis asking them to forward her letter to Joan as I was such a fan.

​​    Joan was beautiful, gracious and surprisingly short in stature.
I remember I was stunned by how blue her eyes were as she wore a black mink hat that covered her hair, a black empire waist dress and at the waist a beautiful diamond broach centered at the cinched waist. ​She stood up to meet me. She wore a perfume on her hands that lingered when she shook your hand.
​ Everything perfectly staged.
​
When I gave her my name, she said she remembered me and appeared sincere.
I had begun training as a singer at that time and went on to have a minor operatic career. I now work for the Boston Symphony Orchestra.
​ She was incredibly gracious, in the moment and focused directly on me. It was a very intense experience.
​
​As I was by far the youngest fan in line, this was a tremendous photo opportunity as I see now in retrospect, the fact that a teenager came to meet her spoke to her powerful outreach and impact.
She leaned over and said to me, "would you like to give me a kiss?" I said "yes".
Again I am aware she was looking for the photo op - a product of fantastic MGM studio training.
​She leaned over and all I heard were cameras clicking. To this day I have searched AP sites and photo libraries to find the photo of that moment. She wished me good luck in my career as I was professionally singing in musical theater at that time and asked that I continue to correspond with her.
It is a moment of my life I will never forget."

Joan Crawford Fan Memories
​ Suzanne Page - "My Way of Life" Book Signing
Copyright Notice
​All original sources of the herein provided research material has been preserved by the webmaster.
​Any desire for usage of the herein material in any literary publication, website or media distribution ​​can be directed to the
​webmaster at the following email address: BryanJohnson@TheConcludingChapterofCrawford.com 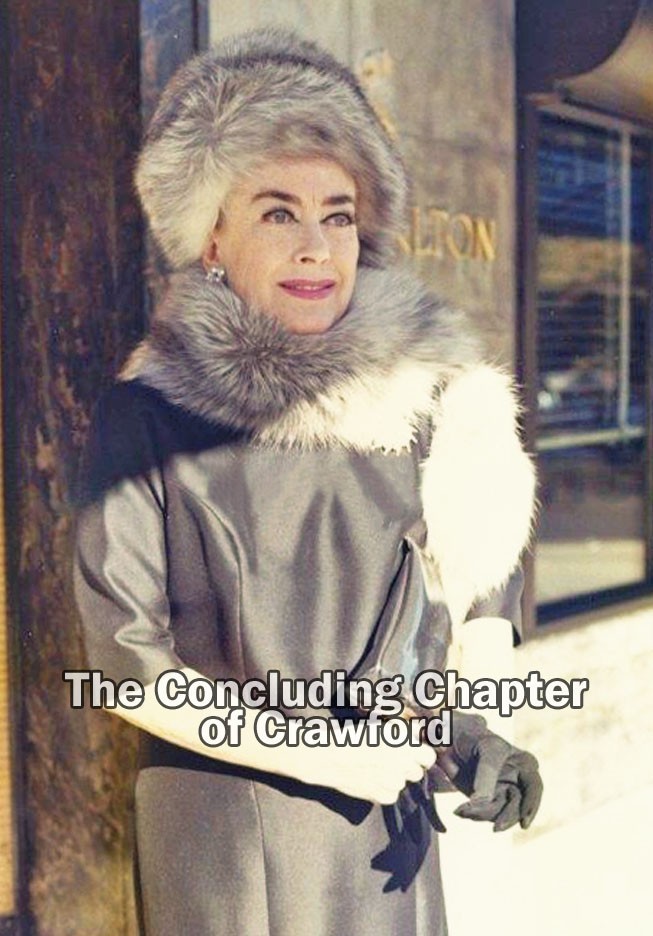 Joan Crawford in front of the Ritz Carlton Hotel in Boston, Massachusetts on November 16th, 1971