Joan's involvement in the production:​
In early December 1970, Joan signed to portray Washington D.C. gossip columnist "Veronica Stuart" in the episode "Potomac Fever" (later renamed "A Capitol Affair"). Filming was scheduled to begin on December 14th, 1970 on the Universal Studios lot in Los Angeles, California. The episode's other guest stars included Larry Hangman and Susanne Pleshette On December 11th, Joan unexpectedly backed out of the project due to illness, and Mercedes McCambridge was hired to replace Joan, with filming occurring during the week of December 21st.
Before Joan's unexpected decision to not film "The Name of The Game," she and her daughter Christina had been promoted together in publications which indicated they would be working on the same studio lot (Universal) at the same time, with Christina filming an episode of "Ironside," entitled "Lesson In Terror." (See article below.)

To remain neutral and to give extra insight into this missed project, I have included with this entry a few details from Christina Crawford's book "Mommie Dearest." In "Mommie Dearest," Christina says Joan allowed her to live in her Fountain Avenue apartment upon her return to Los Angeles during the summer of 1970. However, Christina says she was abruptly evicted from Joan's Fountain Avenue apartment via a telephone call from Joan's secretary, Betty Barker.
​According to Christina, she was instructed to vacate the apartment due to Joan arriving in Los Angeles to film a television show, however, Christina states that Joan backed out of filming this project. Gathering the information together from the confirmed dates of Joan's schedule filming for "The Name of The Game," and Christina's eviction from Joan's apartment, this is undoubtedly the television show Christina is speaking of in "Mommie Dearest."
​Additionally, published publicity articles for Christina surrounding the filming of these shows confirms this theory. In November 1970, Christina was heavily promoted in several nationally-syndicated newspaper articles, one of which publicized Christina's choice to appear nude on film if the opportunity arose, and her appearance on "Marcus Welby, M.D." (See article below.)
​
Webmaster's note: I have included this information from "Mommie Dearest" as to supply the readers with the most comprehensive information I can obtain. The additional information from "Mommie Dearest" may explain why Joan backed-out of "The Name of The Game," being that Christina contends in her book "No Safe Place" that Joan backed-out of filming "Return To Peyton Place" in December 1960 because it meant she and Christina would be working together on the 20th Century Fox lot at the same time, but in separate productions. However, it has been verified through production documentation that Joan's leave from "Return To Peyton Place" was due to the production's ongoing ​rescheduling, until it interfered with her scheduled holiday plans in December 1960.
​I will leave it to the readers' discretion to form their own conclusion from the information at hand.
​​
Click here to read a December 11th, 1970 letter written to Joan from William Morris agent Dick Bloch regarding her cancellation ​.​
Copyright Notice
​All original sources of the herein provided research material has been preserved by the webmaster.
​Any desire for usage of the herein material in any literary publication, website or media distribution ​​can be directed to the
​webmaster at the following email address: BryanJohnson@TheConcludingChapterofCrawford.com 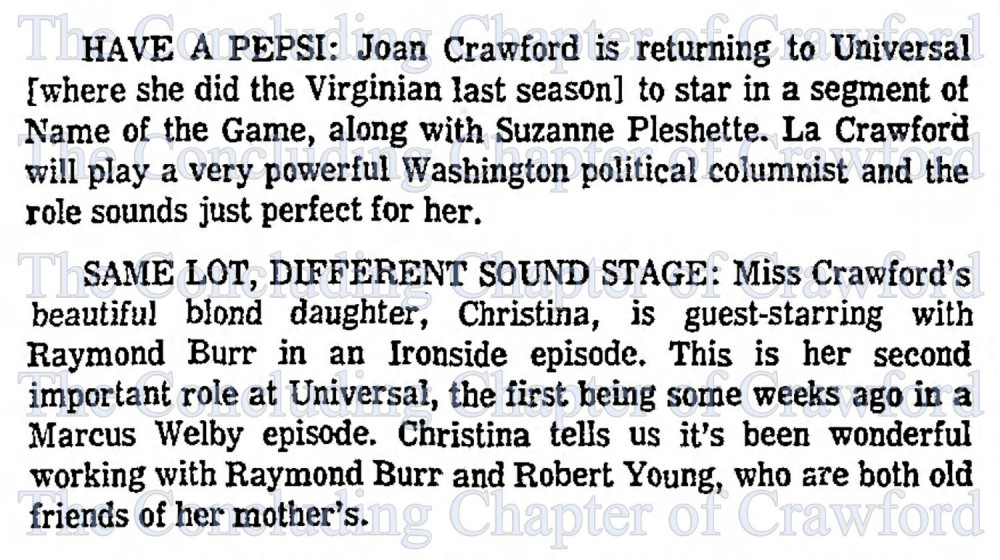 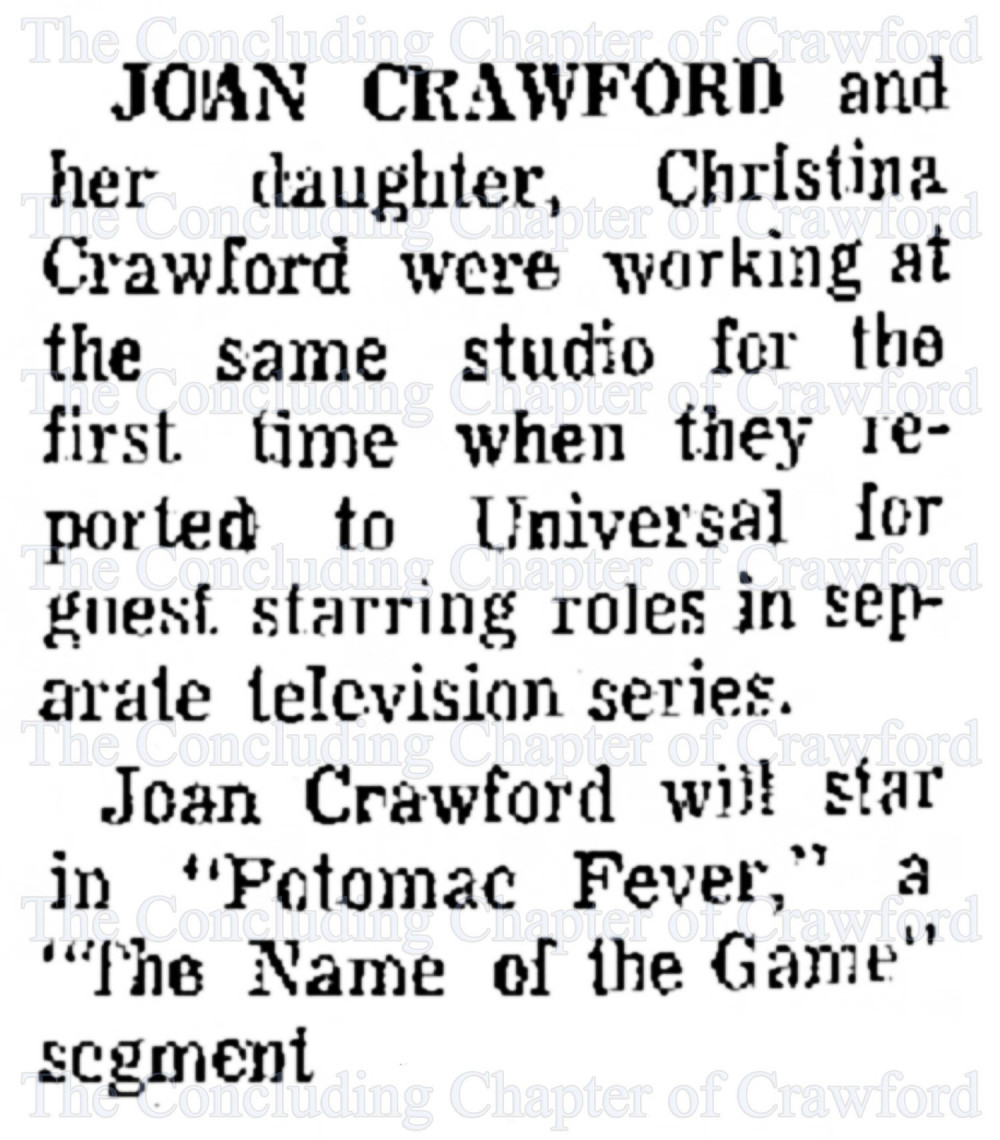