​
Episode Synopsis:
​After her doctor, frank Heatherton, (Barry Sullivan) discovers the ability to replace the optic nerve in the eyes to allow temporary vision to the blind, wealthy blind woman Claudia Menlo (Joan Crawford) demands he perform this procedure on her, and allow her to see for approximately 11 hours. When Dr. Heatherton refuses based on the principal it will leave the donor blind, Claudia threatens him with exposing an infidelity, thus blackmailing him into performing the surgery. Claudia uses a similar tactic to force her attorney to perform the legalities of the agreement between herself and the donor, Sidney Resnick (Tom Bosley).
On the night following the procedure, alone in her apartment, Claudia unwraps the bandages​ at the exact moment the 1965 New York blackout occurs.
Enraged, Claudia thinks the operation was a failure and begins grasping for any object in reach to throw into the darkness. Claudia spends the night attempting to find help in the vacant building she constructed for the purpose to reside in alone.​
The following morning, the sun rises to reveal that Miss Menlo had the ability to see the entire time, but now her 11 hours are over and her vision begins to fade rapidly. As she leans her hands against a large picture window, beckoning the sun not to fade, she does not realize the window was cracked severely by her throwing an object against it during the night. The window breaks, causing Claudia to plummet to her death onto the street below.

Click here to read the entire script for this episode, including a deleted scene between Claudia Menlo and her maid which was filmed, however, edited out from the final production.

Joan Crawford - "Claudia Menlo"
Barry Sullivan - "Dr. Frank Heatherton"
Tom Bosely - "Sidney Resnick"
Byron Morrow - "George Packer"​​​​​​​​​​
​
Production:​​​​​​​​​​​​​​​​
The segments were written by producer Rod Serling, with "Eyes" being taken from his book "The Season To Be Wary," which was published by Little, Brown & Co in 1967.
Serling originally thought of the concept of "Night Gallery" when "The Twilight Zone" ended in 1964. At that time, Serling's series idea wasn't based around oil paintings, but rather wax figures, with the working title of "Rod Serling's Wax Museum."
Serling originally ​approached studio executive Arthur Joel Katz with the concept of "Night Gallery" via letter on April 30th, 1968.​ In the letter, Serling suggested the concept of one actor portraying all three main characters in each story of the pilot, and named Rod Steiger as a potential candidate for the lead. In subsequent meetings, that idea was discarded and by December 1968, Serling had Joan Crawford in mind for the lead role in "Eyes."
​
In a December 1968 letter to Universal executive William Sackheim, Serling wrote the following regarding casting of the pilot:
"Your casting ideas are really exceptional. The idea of Eli Wallach and Anne Jackson [for "The Escape Route"] is really walloping. Telly Savalas and Lee Grant would be my second choice. Karl Malden and Pat Barry or Lola Albright would be my third. Davis, Crawford or Helen Hayes knock me out for the blind woman. [Jacob] Klugman would be my pick for Resnick.​​​, though what happened to Buddy Hacket? Maurice Evans - lovely for Portifoy, but John Mills also. And I'd certainly go for Roddy McDowell or Peter Lawford for Jeremy."
​
​The "Eyes" segment in the episode was the first mainstream directing assignment by director Steven Spielberg. ​Spielberg had impressed the pilot's producer, William Sackheim, previously with a short film subject entitled "Amblin," and Sackheim chose Spielberg for the "Eyes" segment.
​Joan was apprehensive about Spielberg due to his age and inexperience. However, after meeting with Spielberg, she was impressed and he gained her respect, and they remained in touch until her death in 1977.

Spielberg would later say in an interview how comical his first encounter was with Joan. They had scheduled to meet and have dinner at LuLu's in Hollywood.​ Spielberg arrived at Joan's Fountain Avenue apartment to pick her up for dinner, to find her wearing a blindfold and stumbling around the apartment to demonstrate to him how much practice she had done for her role in the segment. She then took off the blindfold and saw Spielberg for the first time and screamed in surprise by how young he was. She told him, "We can't go to dinner, people will think you're my son!"
​
Filming began on February 3rd, 1969 on the Universal Lot in Los Angeles, California. Throughout the segment's filming Joan lived in her bungalow on the lot. During filming, Joan and co-star, Barry Sullivan, had difficultly reciting their lines, and director Steven Spielberg placed cue cards around the set to help them. ​Joan later recalled her experience on "Night Gallery" to a reporter saying she adored Rod Serling and his writing "but his dialogue was the hardest to memorize. There's a rhythm to his words and if you change one of them, the rhythm is off and you can't remember."​​
On February 5th, Joan lost her equilibrium (caused by an inner ear cold) on the set, and she credited her makeup-man Monty Westmore for saving her from a possible injury when ​she lost her equilibrium in her bungalow around 5:30 am, just as Westmore was entering to begin her make-up for the day.​

According to director Steven Spielberg, the entire segment was re-edited by the producer due to Spielberg's filming style, which had been recently influenced by the European "new wave" films of the 1960s.​​ Spielberg said his editing wasn't thought to be appropriate for the average NBC viewer.

​​Television
​Drama and Suspense
Copyright Notice
​All original sources of the herein provided research material has been preserved by the webmaster.
​Any desire for usage of the herein material in any literary publication, website or media distribution ​​can be directed to the
​webmaster at the following email address: BryanJohnson@TheConcludingChapterofCrawford.com 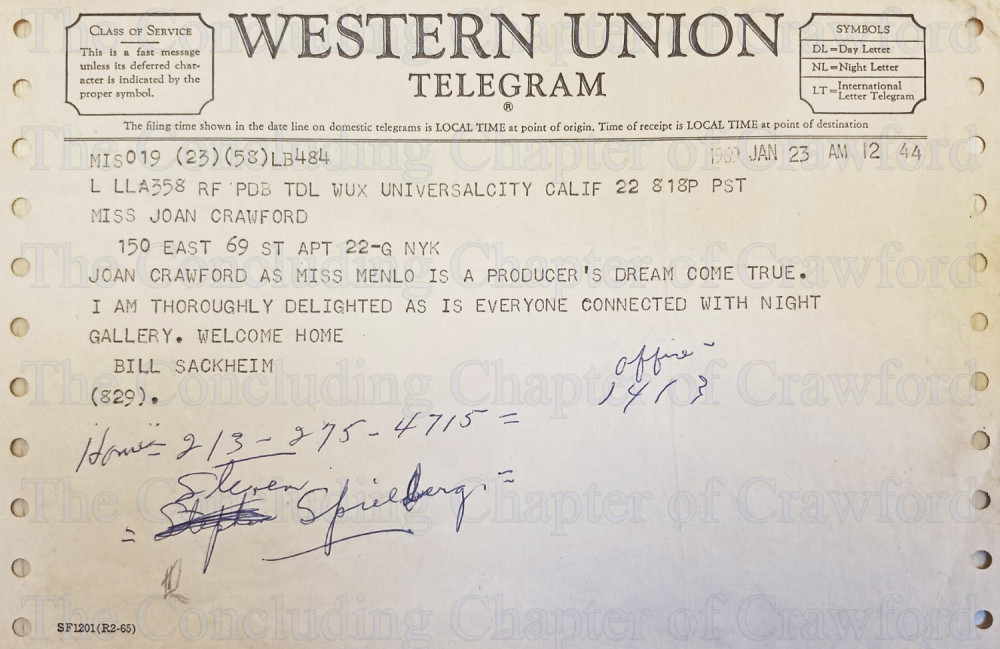 Screenshots of Joan's appearance in the segment "Eyes."
For additional photos and screenshots from the segment, consult the 1969 photo gallery.​
​A January 23rd, 1969 telegram to Joan from producer William Sackheim, welcoming her to the production.
Note that Joan has written the contact information for the segment's director, Steven Spielberg, at the bottom of the
​telegram, ​initially misspelling this unknown director's name as "Stephen."​