THE CONCLUDING CHAPTER OF CRAWFORD
​

Behind The Scenes Photos
​

Production Details:
​     In  January 1961, director and producer Hall Bartlett via his production company, signed a production and release agreement for the film with United Artists. Shortly afterword ​hired Robert and Eileen Bassing to write the film's screenplay, however, their script was ultimately not used.
Bartlett's original choices for the leading roles of Dr. MacLeod (portrayed by Stack) and Nurse Terry (portrayed by Joan) was Kirk Douglas and Lana Turner with a filming date of August 14th, 1961.
​
​​​Bartlett first contacted Joan with regarding the film in June 1961.
​Filming began (with the final product's cast) on June 1st, 1962 at the Desilu Studio in Los Angeles, California.
Joan arrived in Los Angeles on June 16th to begin filming her scenes.​

Editing began in September 1962.
​In early October, composer Elmer Bernstein was hired to score the film​​.
​Several of Joan's scenes were cut from the final film.
​Following a preview screening of "The Caretakers", Joan sent the following letter to Hall Bartlett on January 15th, 1963 berating him for cutting some of her scenes from the film:
​
​"There is no rhyme nor reason for my performance in "The Caretakers", since you have eliminated my scene with McBain, and all cuts and looks that I played subtly to indicate my attraction for Stack. Cutting the scene where McBain accuses me of being in love with Stack was drastic beyond belief; and my one big scene of trying to sell Herbert Marshall on my old-fashioned ideas was the crux of my performance. Anyone could have played my part as it stands now. I'm heartsick beyond belief."​​

On August 4th, 1963, Robert Stack began a tour to 33 cities to promote the upcoming release of the film.​​

​
Screenings & Release​​​:
On April 15th, 1963, a special screening of the film was held at the Lytton Center in Hollywood, California.
​The screening was hosted by Joan, Robert Stack and Janis Paige.
On May 22rd, 1963, a special screening was held for senators and their staffs in the New Senate Office building in Washington, D.C., followed by a post-screening reception in honor of the film's stars Joan and Robert Stack, writer Henry P. Greenburg and producer Hal Bartlett.​​
​​     On August 9th, 1963, a screening of the film was held at the Director's Guild Theatre. ​The screening was sponsored by the Lamp Minders, a non-profit organization dedicated to raising funds for the benefit of the Los Angeles Psychiatric Service.
In August 1963, 24 screenings was set for public and social groups. Including press and disk jockeys, The General Federation of Women's Clubs and the advisory committee of the Los Angeles County Medical Board.
August 21st, 1963 The film is released nationally.
September 18th, 1963: The film opened in 50 theaters in New York ​​following a strong-grossing three-week run on the distributor's "premiere showcase" plan. 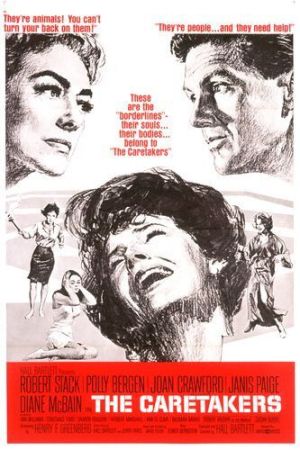 Copyright Notice
All original sources of the herein provided research material has been preserved by the webmaster.
Any desire for usage of the herein material in any literary publication, website or media distribution can be directed to the
webmaster at the following email address: BryanJohnson@TheConcludingChapterofCrawford.com