THE CONCLUDING CHAPTER OF CRAWFORD
© All original Joan Crawford research and original text herein is property of Webmaster Bryan Johnson and is copyright protected by the United States Copyright Act of 1976. Copyright © Bryan Johnson
Articles

Stars of the night sky keep to fixed orbits, never interfering with one another. Things sometimes operate that way in Hollywood, too.
​Bette Davis and Joan Crawford, stars of equal magnitude who ruled in motion pictures during the fabulous '30s, never got to know each other.
They met briefly on one occasion but no friendship developed. No one would believe, in fact, that these two ever could be brought together in the same cast.
Yet, now, in the Indian summer of their careers they’re co-starred in a chilling thriller, "What Ever Happened to Baby Jane?"
​
Before shooting started I had them to my home for an interview dinner and came to the conclusion they’d missed a lot by not getting to know each other sooner. Everyone expected a power play from these two who are accustomed to dominating the scene.
Rumors of bad feeling and tart exchanges between them were already circulating. I told them we haven't had much excitement around here lately and they should start fighting and bring this place to life: "You two should be dynamite."
​
Bette said: "Will it be disappointing if we get along well? Of course there’s not a chance they’ll believe everything is friendly-the other situation makes a better story. If I'm concentrating on what I'm doing, I can look as if I don't know anybody else is around." "I'm aware of that," Joan cut in, "you didn't say good morning to anybody for a full five minutes today."
"Will both share in the profits, and who gets first billing?" I asked. Joan took over: 'Yes, both share. Bette
gets first billing, of course-she plays the title role. There was no problem about it." Bette suggested they have it "Joan Crawford and Bette Davis" with an asterisk and say "alpha- billing." I thought that would be fun.I was interested in finding out who' first had the story and how they eventually got together. Each of them had been sent the book at different times. "A friend of mine, Bill Frye, gave me the story to read two years ago when it was first published," Bette explained. "He tried to buy it but nothing came of it.
​Then a year ago .1 sent it to Alfred Hitchcock-I thought he should direct it whether or not I was in it, but he had other pictures lined up."
​
Joan says she has wanted to do a picture with. Bette since 1944. "When Hollywood Said It 'Couldn't Be Done," but here they are - BETTE and JOAN.
Hate pent up for years seethes to the surface as Joan Crawford upbraids Bette Davis in "What Ever Happened to Baby Jane?" their first joint film.
I came across 'What Ever Happened to Baby Jane?' I sent it to Bob Aldrich and told him it was for Bette and me," she said.
The Henry Farrell novel is about two middle aged sisters retired from show business. Baby Jane [Bette] was a child dancer in vaudeville and Blanche [Joan], a former stage star, is crippled from a mysterious accident and confined to a wheelchair. Their careers over, they live together in a house of hate in Los Angeles on the invalid s scanty savings.
​
Bette described the role to me as, "Without doubt one of the most peculiar and rough parts that ever came my way. It's like working with gossamer wings." Joan smiled happily "I'm the crippled sister in a wheelchair. There are scenes that will tear you to pieces. When we rehearsed this morning Bette practically tore the set up. She whirled my wheelchair around and lifted it 6 inches from the floor. This is wonderful for me. I usually play the shrews. Now I can sit and watch Bette do it."
The three of us were dressed in black. As we sat down to dinner, I said we looked like three black widow spiders. But there was a difference: Joan, always the glamour star, wore a black cocktail suit, the somberness lit with diamond earrings and a diamond pin in her hair. Bette's black was unrelieved by jewelry except for a small pin.
​
Bette came from the legitimate theater and returned to Broadway successfully more than once, most recently in Tennessee Williams' "Night of the Iguana." Joan, purely a star of movies, maintains the old-time glamour bit to the hilt.
Joan left first-her chauffeur had waited with her car. Bette called her secretary and asked her to come by for her. Her closing estimate of Joan: "In the area of being a worker and having drive, Joan and I are in- credibly alike. But the whole exterior - well, nothing could be farther apart." 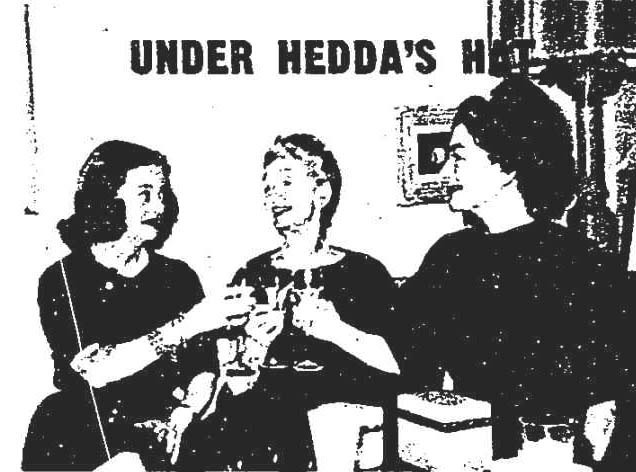