THE CONCLUDING CHAPTER OF CRAWFORD
​© All original Joan Crawford research and original text herein is property of Webmaster Bryan Johnson and is copyright protected by the United States Copyright Act of 1976. Copyright © Bryan Johnson
Articles

​
​"Those Fabulous Broads Battle It Out!" By Len Baxter (Motion Picture Magazine, November 1964)

I would call it the feud of the century. I was right there, involved in the production of “Hush…Hush, Sweet Charlotte” when it erupted, too, so you might call me an eye-witness. “What Ever Happened To Baby Jane?”, with which I also was affiliated, was a lark compared to “Hush…Hush, Sweet Charlotte”.
​Such hijinks! And such rumors! They said…Bette Davis was directing the picture. They said…Joan Crawford was holding up production, pretending illness. They said…Bette would never forgive Joan for “betraying” her. They said…Joan wanted to be friends and Bette couldn’t care less.
​
Let me straight off that “Hush…Hush, Sweet Charlotte” ranks as the most unhappy picture I’ve worked on in 20 years in Hollywood and I certainly understood it when an important member of the production crew called it a day and flew off to take another assignment…as far away as possible, in Rome.
On the Baton Rouge location, reporters noticed a chill in the air even though the Louisiana temperature was 103 degrees.
“If Miss Crawford is offering friendship, Miss Davis isn’t having any.” Reported one.
“Bette barely speaks to her co-star,” said another.
Well, they should have been at rehearsals. Miss Davis was doing quite a lot of talking. Loudly. And Miss Crawford, who is hardly a pushover, couldn’t get her voice heard at all.
​
“The actors – Bette, Joan, Joseph Cotton, Agnes Moorehead and Victor Buono – were supposed to have two weeks’ rehearsal. The days seemed to evaporate with nothing accomplished. Miss Davis was displaced with the script and much of the time was spent arguing each scene with Director Robert Aldrich.
Of course there were rumors from the beginning that Bette Davis and Joan Crawford were fighting the feud of this generation.
These rumors started the minute the two teamed for “Baby Jane”.
Two top movie queens in one picture? The set wouldn’t be big enough! But the rumors then couldn’t have been more wrong.
That didn’t surprise me. These are great pros, these two. They enjoyed the challenge of working together and they worked well.
Each star played her role to the hilt and then some. They challenged each other to what I consider two of the best performances of their careers. But there was no feud. The feud started later.

On the first day of rehearsal for “Hush…Hush, Sweet Charlotte” everyone on the set was in pretty good humor. It was mostly the same gang.
​The first picture had been a smash. So here we go again. Joan came briskly on the set, went at once to Bette and said, “I’m so glad we’re going to work together again. I think it’s going to be wonderful.”

They talked. They talked about Bette’s last picture. If Joan was expecting any verbal thank-you for the flowers she’d sent, she didn’t get it.
​She had sent a bunch of first-day flowers and a huge box of kitchen matches tied in a ribbon because Bette’s always looking for a match, and Bette had put a note on Joan’s dressing table acknowledging same. But nothing verbal.
The impression they got was that this is a woman who doesn’t know how to say 'Thank You'. She wants to, but she doesn’t know how.
​
Rehearsal got under way. In one of the early scenes Crawford says “Come, Charlotte, come, let me help you back to bed, dear.” Joan put her arms around Bette to lead her and Bette flung them away and strode off. “I’m not going to rehearse this scene until it’s written right,” she said.
I think that’s when we all realized something had gone wrong between them. And then it got worse.
Bette seemed to have the inside track with Director Aldrich. When Crawford was doing a scene, Davis would sit in front of the camera with an authoritative look on her face, almost as if she were a co-director.
This is strictly unusual. A director doesn’t permit an actor to sit in front of the camera, directly in another actor’s line of vision, unless the actor is part of the scene. Such close scrutiny would put the most professional person ill at ease. And Joan was made ill at ease. Nor did it help any that Bette was cutting lines.
On one of the first days, Joan and Joe Cotton were running through a scene and after they’d gone through it once, Bette said. “I’m cutting this dialogue, Miriam doesn’t need this, and you, Mr. Cotton, I hope you don’t mind. These lines hold me up.”
This particular day, Bette left the set at 3:30 and the minute she’s gone, Joan handed a not to Bob Aldrich, “Mr. Aldrich,” the note said, “May I see you in your office when you dismiss the cast?”
It was her one and only interview with Aldrich alone since the picture started and since they were in his office I can only surmise what was said, but my guess is, Joan’s pitch went something like this:
“As director of this picture, if you have a damned good reason, you can certainly cut my lines. But no one else can!”
That was the first and last time she saw Aldrich except on the set. His lawyer would call her lawyer in New York and her lawyer would call his lawyer. That’s the way they communicated. That’s the way they were making a picture. Can you imagine a couple of lawyers making a picture?
​As for Bette and Joan, there wasn’t much communication at all.

Joan contracted a virus infection, was hospitalized twice, came out to return to work, developed virus pneumonia once again and two days later was back in the hospital, this time seriously ill. Flowers came streaming in from members of the cast and crew of the picture.
​“Come back, we miss you,” wrote Agnes Moorehead.
There were notes and telegrams and messages from all the people who’ve worked with Joan through the years and when she was strong enough to receive them, phone calls.
“Well,” said a well-known writer, “what do you hear from Bette?”
​
“Nothing.”
“No flowers?”
“No flowers.”
“No telegram?”
“No telegram.”
“No card?”
“No card.”
“No call?”
“No call.”

The writer promptly hung up and wrote a column about the feud, part of the endless reams of type on the friendship that might have been but wasn’t.
What happened? The writer asked. What happened to the rapport Crawford and Davis once had?

To understand what happened you have to go back in time, back 20 years to the time it first occurred to Joan Crawford that she and Bette Davis should work together. Bette was queen of the Warner Brothers lot at the time. She had a long string of top pictures. Joan’s once-great career was in a slump.
​She’d walked out on her contract at MGM where she was constantly playing the rags-to-riches story over and over. And even when signed to Warners, she refused to work in the mediocre scripts they handed her and went without work for two years. That’s when I first knew her, when she worked in her first picture there, a nothing, a guest appearance in “Hollywood Canteen” in which Bette Davis appeared too, Indeed, every star on the lot had a walk-on in that one, including 'Trigger' the horse.

“Each is a Hollywood star of the first magnitude,” wrote Lily may Caldwell in the Birmingham News, “but it’s Joan who’s queen of this Bayou County plantation where the murder mystery is being filmed.”
“Miss Crawford always says good morning when she walks on the set,” a reporter said. ​“Miss Davis seldom answers her, Three hours later she may say “hi” and Miss Crawford looks around to see if she’s addressing her or someone else.”
​
“I feel sorry for Davis,” remarked one of our crew. “She’s not able to kiss and makeup, and without team work making movies is pretty grim business. Crawford obviously wants to clear the air if she can but Davis doesn’t know how to say I’m sorry and Crawford doesn’t feel she has anything to be sorry for.”
What with the heat in Baton Rouge and the heat on the set. Joan returned to Hollywood depleted and spent. She promptly picked up pneumonia, her white corpuscle count was went soaring and she landed in Cedars of Lebanon. She was a sick girl and her doctor, knowing how disciplined she is to the old show-must-go-on tradition, had all he could do keeping her inactive. It didn’t help that a company executive implied to the press that Crawford was ill because she wasn’t happy with the way the picture was going.
No one who has even known Crawford would buy that. No matter if the script is good or bad, or if a picture is running smoothly or not, this is a job and she gives it all she has. She came out of the hospital too soon and paid the consequences.
She resumed work, with her doctors limiting her to a two-hour day. Well, it didn’t work. The first day she worked from 8:30 until 12:45, but of course she’d been up and in makeup by 5 a.m. Most patients after two bouts with pneumonia are forced to take a six to eight week recuperation period.
Crawford had a hot three days and she wasn’t up to a full schedule of work which is exactly what she is doing.

Her doctor warned her. Two hours, he said. Three at the most.
“But they’ll think I’m a sissy,” she wailed.
“They can call you a bitch, a tyrant or a star, but never sissy.” He laughed.
And then we ran into one of those days where she was, as usual, in the studio by 5 a.m. and they worked her until 5 p.m.
That night she went home and fell on her face and the next day was back in the hospital where she’s been ever since.
Each time Joan was hospitalized, production was halted.
​For a while it looked like Aldrich would wait for her indefinitely.
But then, in her hospital bed, Joan got the word that she was being replaced by Olivia de Havilland.
The news came as a shock to her. Up to then, Joan had no intention that anything was amiss.
​
That’s too bad this had to happen…aside from Joan’s loss. It would have been interesting to see if Crawford could have won Davis over to her side.
​After all, Joan had waited 20 years to be Bette’s friend.
“This isn’t the first enemy I’ve ever made.” Joan says honestly. “But I’ve tried so much harder to end the enmity. It was a challenge to make her my friend.
​I’ve tried so hard and I can’t try any more. Life is too beautiful. There’s no point in expending one’s emotional energies except for the people who want them.”
The two “implacable” enemies Joan made – actresses Mercedes McCambridge and Janice Rule – eventually succumbed and became Joan’s friends and admirers, but this time I don’t think she’s going to make it. 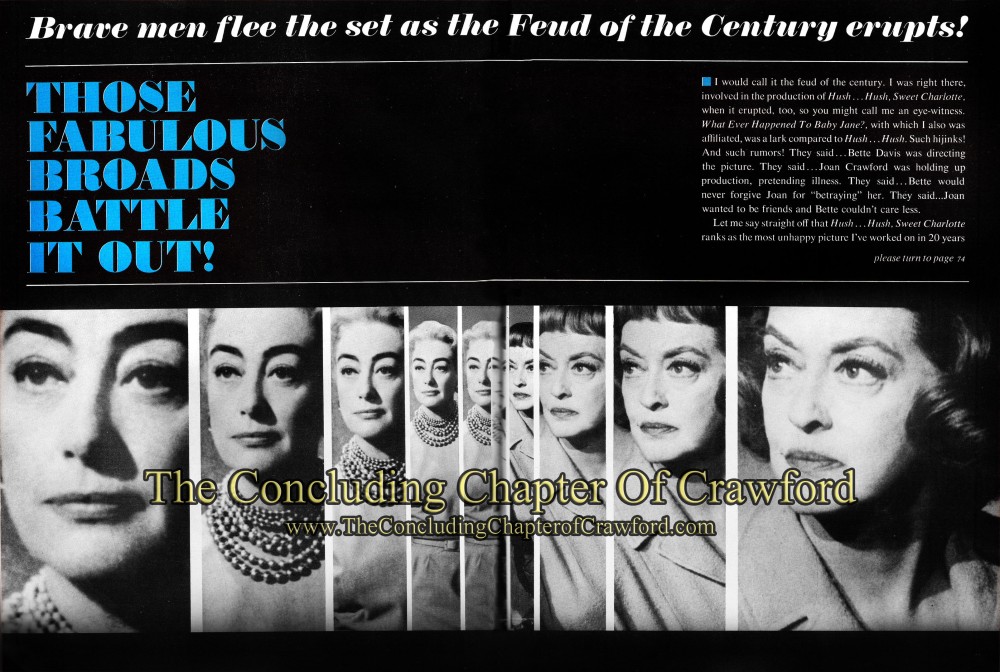