"What Ever Happened To Baby Jane?"

Film Synopsis:
27 years after an automobile "accident" that crippled film idol Blanche Hudson (Crawford), she relies on the caregiving of her alcoholic former-child star sister, Jane (Davis).
When a retrospective of Blanche's films are shown on television, it infuriates Jane to the degree that she decides to regenerate her childhood career as a vaudeville performer all while tormenting Blanche.

Production Details:
According to Robert Aldrich, the original asking price for the film rights to the Henry Farrell novel was $10,000.00, however, as interest in the project grew the price escalated, with the final selling price being $85,000.00.

Originally, Pearl Bailey was wanted for the role of "Elvira," however, Bette Davis objected. The character of "Elvira" was originally named "Edna".
The character's name was changed in a July 10th, 1962 script revision.

Maidie Norman (who portrays "Elvia") re-wrote her lines in the film to give her character more dignity.
Originally, her character was written as a doltish "yessum" character. Norman said in an interview in 1995:
"I'd say, 'you know, this is not the way we talk these days. This is old slavery-time talk." (Source: Jet magazine, May 25th, 1998)

According to actress Anna Lee (who portrayed the neighbor "Mrs. Bates"), her step-daughter, Caroline Stevenson was originally hired to portray the role of her daughter in the film and was fitted for wardrobe, however, at the insistence of Bette Davis, Davis' daughter, B.D. Merrill, was hired for the role. (Source: "Anna Lee: Memoir of a Career on General Hospital and in Film")

Henry Essex attempted to obtain a co-screenwriter's credit for the film for an original screenplay he had written from the novel by Henry Farrell, however in October 1962, the Writer's Guild of America ruled Lukas Heller would receive the sole screenplay credit.

The vehicle used in the film which inflicts the injures to "Blanche" is a 1931 model J395 Duesenberg Roadster.
At the time, the roadster was owned by Pacific Auto Rentals and was seen regularly on film sets until the late 1970's when it sold to a private party. Later, it was a frequent contestant in auto shows around the country.
The roadster was auctioned on March 8th, 2008 for $2,400,000.00.

A story covering the making of the film was originally slated to be the cover story in the October 12th, 1962 issue of Life Magazine, with Joan and Bette Davis gracing the issue's cover, however, a story about Pope John XXIII was used instead.

Victor Buono learned of his Academy Award nomination for "Best Actor In A Supporting Role" while in San Diego, California with his ill 17 year old brother, who had bleeding ulcers.
Prior to Buono signing-on for the production, Peter Lawford had been slated for the role of "Edwin Flagg".

Production Timeline:
May 9th: Joan and Bette Davis sign their contracts for the film. (Source: Bette & Joan: The Divine Feud)

July 9th: Rehearsal are scheduled to begin. (Per Aldrich documents)

July 25: One of the parakeets used in the film gets loose and flies up to the studio's catwalk.

September 10th: Joan completes her work on the film.

Late-September: Bette Davis and Debbie Burton record the film's song "What Ever Happened to Baby Jane?", which is later released as a commercial record in November 1962.

Early-October: The Writer's Guild of America rules Lukas Heller will receive sole credit for the film's screenplay.
Previously, Writer Henry Essex had sought a credit for an early screenplay he had written for the film.

Early November: A record of the film's title song "What Ever Happened to Baby Jane?" sang by Bette Davis and Debbie Burton was released by MGM Records. On the reverse side was "I've Written A Letter To Daddy" sang by Debbie Burton.


Screenings & Release:
The film was originally slated for a December 1962 release, however, Warner Bros. upped the release to November In order to get exhibition dates to qualify for 1962 Academy Award nominations.
October 20th, 1962: The first preview is held in Long Beach, California. (Source: Bette & Joan: The Divine Feud)
October 22nd, 1962: A special invitational screening is held at the RKO 86th Street Theatre in New York for Warner Bros. executives.
October 31st, 1962, the film is limitedly released in New York, Los Angeles and select cities.
November 7th, 1962: The film is released nationally. 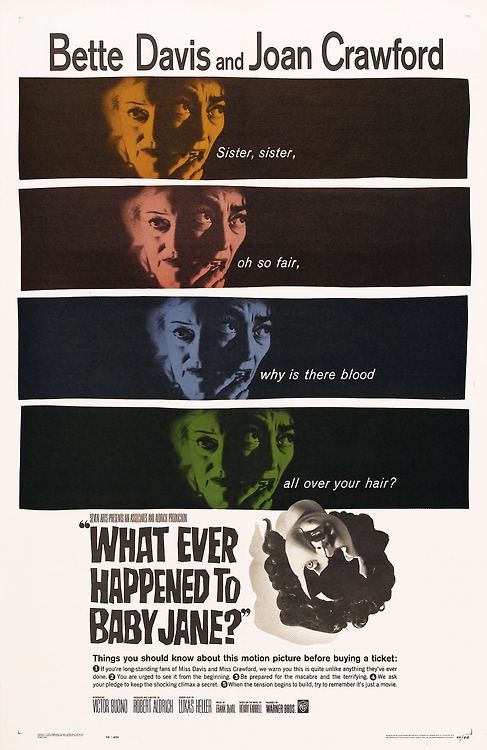