Film Synopsis:
Following the public freak-accident death of a high-wire performer, circus-owner Monica Rivers (Crawford) become the center of the attention as murders begin to plague the traveling circus.

Production Details:
"Berserk" was the first film made under a three-film contract with Columbia Pictures in February 1966.

The circus footage in the film was filmed on-location at the Billy Smart Circus near London, England.

Joan did not like the original title "Circus of Terror." In an interview, Joan said "I hated that title, so I told my producer, Herman Cohen. He came in excited the next day and said, 'I got it changed for you - it's now 'Circus of Blood'! The title was officially changed to "Berserk" in early 1967.

October 20th: Joan and the cast and crew attend Billy Smart's Circus' "Gala Night". On this date much of the circus footage used in the film is record.

"Joan Crawford, one of motion pictures' great stars, returns to the films in "Berserk," now showing in New York.
"Berserk," the new suspense drama starring Joan Crawford, had its metropolitan New York area premiere at the DeMille Theater on Broadway and at 28 Showcase theaters on January 10. Co-starred in the mystery-thriller are Ty Hardin and Diana Dors. Featured are Michael Gough, Judy Geeson and Robert Hardy.
Miss Crawford, one of the screen's greatest stars, plays the owner and ringmaster of a traveling circus that is plagued by a series of grisly murders.
In recent years Miss Crawford has made a number of highly successful films, among them "Sudden Fear," "Whatever Happened To Baby Jane?" and "Strait-Jacket." Teenager Judy Geeson is one of the screen's most popular newcomers. In the past year she has made four films, "To Sir, With Love," with Sidney Poitier, "Hammerhead," with Vince Edwards, "Prudence and the Pill" with Deborah Kerr and David Niven, and "Berserk."
The Herman Cohen production for Columbia Pictures was filmed in England under the direction of Jim O'Connolly from a screenplay by Cohen and Aben Kandel." 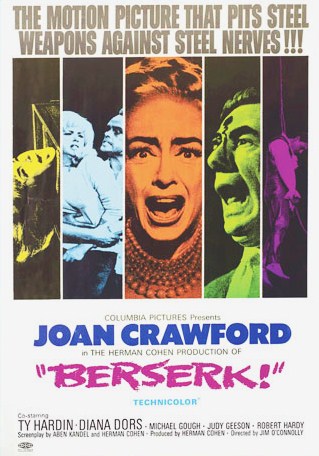