"I Saw What You Did"

Film Synopsis:
During a slumber party, three young girls make crank telephone calls to strangers.
They mistakenly call a man who has just murdered his wife and disposed of her body and
whispers "I saw what you did, and I know who you are."

Production Details:
Following Joan's termination from the film "Hush...Hush, Sweet Charlotte" in August 1964, "I Saw What You Did" was her first appearance in a film. Upon signing her contract for the film on September 29th, 1964, Joan supplied producer William Castle with paperwork from her doctors documenting her complete recovery from her ailment. For her services, Joan received $50,000.00 and top billing on promotional material.

Grayson Hall was reportedly promised the role of "Amy Nelson" before Joan accepted it.

The film's original title was "In Case Of Murder."

"I Saw What You Did" was the first of a new five-film contract William Castle made with Universal.

Pre-production arraignments began in July 1964 upon Castle's completion of "The Night Walker."

November 3rd-6th: Joan films all of her scenes for the film. 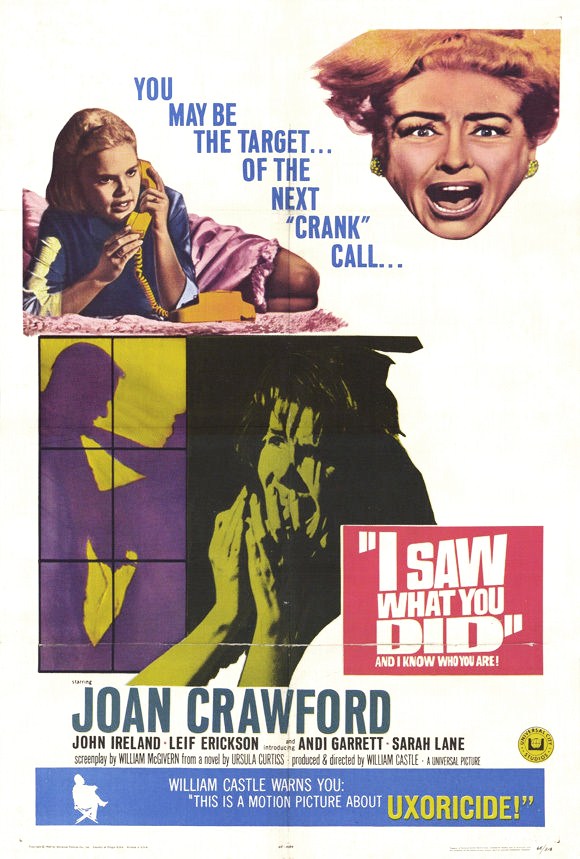