Film Synopsis:
After 20 years, Lucy Harbin (Crawford) is released from a mental institution for murdering her husband and his mistress with an axe during a fit of temporary insanity. Following her release into society, she begins to feel she is going mad again when a series of new axe murders plague those close to her.

Production Details:
Joan Blondell was originally hired for the role of "Lucy Harbin". Following an accident Blondell had in her home in early May 1963, she was unable to work.

Actress Anne Helm was originally hired for the role of "Carol Harbin," however Helm was fired on the first day of filming and replaced by Diane Baker. Helm later claimed Joan had her fired due to jealously. Click here to read a 2001 interview with Helm discussing her experience on the film.

April: William Castle is offers Joan Blondell for the role of “Lucy Harbin. Blondell later turns down the role due to an accident which prevents her from filming.

April: Anne Helm is hired for the role of “Carol Harbin”.

Mid-May: Joan is hired for the role of "Lucy Harbin".

Early July: Anthony Michael Hayes is hired for the role of “Michael Fields”.

August 5th – 9th: The cast and crew film on location in Riverside, California. This on-location filming included the exterior scenes of Joan and Diane Baker on the street shopping, the "Cutler Farm" location, and the Field's Family mansion. For contemporary photos of the Field's mansion, click here.
August 21st: Diane Baker completes her scenes. 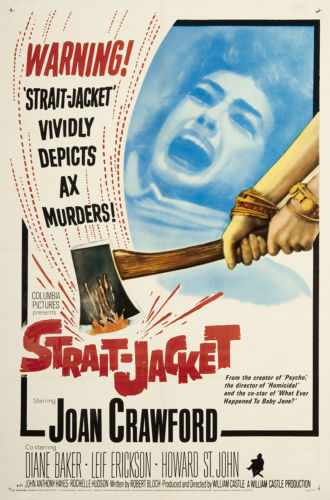