​
​(The following interview with actress Anne Helm is from the book "I Was a Monster Movie Maker" by Tom Weaver, 2001)
​
​​​​“What was great about “Strait-Jacket”, and very sad for me, too, is that I felt very much like family. They brought me in very early on, when Joan Blondell was scheduled to star, and then Joan Crawford got a-hold of the script.
She had a great deal of money in those days because she had been married to the president of Pepsi-Cola, so what she did was basically buy Joan Blondell’s contract out and bump her off and get the part. I found this out later – much later, after I had left the picture.
​That’s when I heard all these horror stories.”

When Joan Blondell and you were scheduled to star together, did you meet Blondell?

“No, I did not, but I went in for rehearsals and everyone was telling me what was going on. Then all of a sudden Crawford was going to do it. Of course, I was delighted – I had no idea that Joan Blondell had been bumped off. And Blondell had a nervous breakdown over this, ‘cause “Strait-Jacket” was a very big break for her. She had had a large lull in her career, and I think it pretty much devastated her [to lose “Strait-Jacket”]. But, anyway, I was delighted, I thought, ‘God, Joan Crawford! I can learn so much from her’ – I had that much admiration for her. But it came to be that she really disliked me intensely, she was jealous, and got me bumped off, too.”

[Webmaster's note: Joan Blondell confirmed later that Joan Crawford did not steal the role from her. Blondell walked through a glass partition in her home and had 60 stitches in her leg and was unable to work]​​

So you did get to meet Crawford?

“Oh, yes, I got to rehearse with her for a few days, and it was hell – it was not a good situation! It was a lot of hypocrisy, and a lot of times I had no idea what was going on. I was very “innocent” in those days in terms of not seeing through things, not my understanding what was really happening. She just didn't want me on the movie. And they all loved me – William Castle and Robert Bloch loved me, and we had been working together very intimately on the part, which was a wonderful part. I was really disappointed – I was really shaken by it, actually.
​I never once thought I would ever want to leave the acting profession, ‘cause I loved it so much, but it so hurt me on a personal level that I really considered wanting to get out of the business. I also wondered if I had the ‘stuff’ to be in the business. It brought out a lot of self-doubt and insecurities for me. And up to that point, I just loved acting! But this sort of knocked the wind out of me.
It was a good lesson for me, it gave me some ‘building blocks’ of strength and helped me start looking at things in a different way. And not to be entirely trusting of everybody [laughs]! But that comes from being young, our innocence and our trusting of other people.

“He was great. He was my ‘friend’ up to a point, but Crawford was certainly the ‘meal ticket’ on that for him.
​I was disappointed – very disappointed – by everyone concerned. But I was just some little pawn who was used by her, I felt.
She really wanted her friend Diane Baker in the part – and Diane was wonderful in the part.”

Can you give a for-instance of how Crawford made life on the set hell for you?

“She didn't like the fact that I brought a Diet Coke on the set, she made a big issue of that. She pulled all this technical stuff with me in rehearsals, where she wanted me to say the line right at the moment she (let’s say) dropped an ice cube – this was in the first rehearsal.
​She was just a very hypocritical person. And I was privy to a lot of things – conversations of hers that I heard on the set. ​She really wanted me off the picture, and I knew that. But by that point, there was no way I even wanted to be on the picture. She was a very sick woman.
​She pushed all my buttons for sure! (In fact [laughs], I was delighted when her daughter came out and said all these dreadful things about her In “Mommie Dearest”. It was many years later, but it made me feel less bad!)
​
Bette Davis called me after this happened and she told me what a bitch Crawford was, so that made me feel good. I saved all the letters from Joan Crawford and I have them in my scrapbook.
​She sent these loving, sweet saccharine letters to me and sent me flowers – and I felt like she had murdered me [laughs]!”

“Yes, after I left the picture. She was so sorry ‘it hadn't worked out’ and all this stuff [laughs] – it was just nonsense! It was bizarre, the whole event was very bizarre for me.”

And Crawford was such a name that nobody had enough gumption to stand up to her, I guess?

“To them, it was wonderful that they had a huge star in this movie. I think the most difficult part of the business is the impersonal part of it.
​This was one of those situations where I got to see a lot of devastation – and then I became part of it! But look at Joan Blondell. She had a nervous breakdown, and, my God, she’d been around for a while!”

Were you friendly with Bette Davis?

“No. A designer friend of mine was very close to Bette Davis and had done a movie with her, and this friend had told her what had happened. Crawford and Bette Davis had had this huge feud – they had just finished ‘What Ever Happened To Baby Jane?” and their feud was all over the papers. So Davis was just fueling the fire, I think, when she called me [laughs]. It was one-ups-manship for her, another feather in her cap to just say ‘ That woman’s a bitch!’ But it was a wonderful call for me, because Crawford had crushed my ego.
I really looked up to Crawford, and I didn't realize I was dealing with a sick woman. I took it very, very personally.
​But, again, in retrospect, it was probably a wonderful thing that happened to me ‘cause it made me stand back and see the business from a different perspective. ​I had stars in my eyes about everyone - ‘God, Joan Crawford!’- and I didn't know there were people like her out there.
​You have to be aware of that, otherwise you can get crucified in this business. Or any business, for that matter!”

Did you ever wonder what would have happened in your career if you had been in “Strait-Jacket”? If it did turn out to be a big moneymaker.
​
“I've often wondered that about certain parts; if I had done this part of that part, what would have happened. I always remember the movie Haskell Wexler directed, ‘Medium Cool’ (1969) – my agent had me turn it down. I really wanted to do the part, but they couldn't come up with the money because it was a low budget. I really always regretted not doing that; it would have changed the course of my career.
​That was one of my regrets, I would love to have worked with Wexler, ‘cause he was really an artistic man." 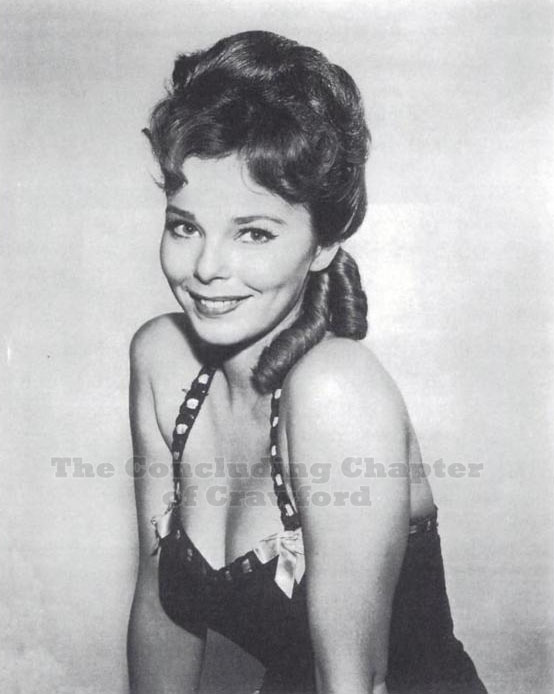 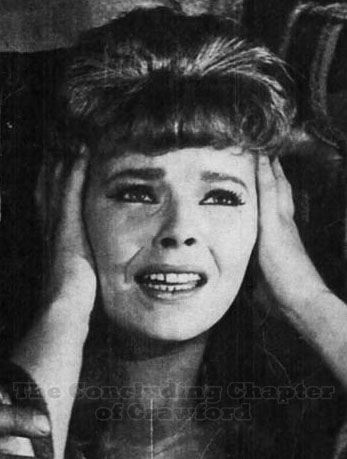 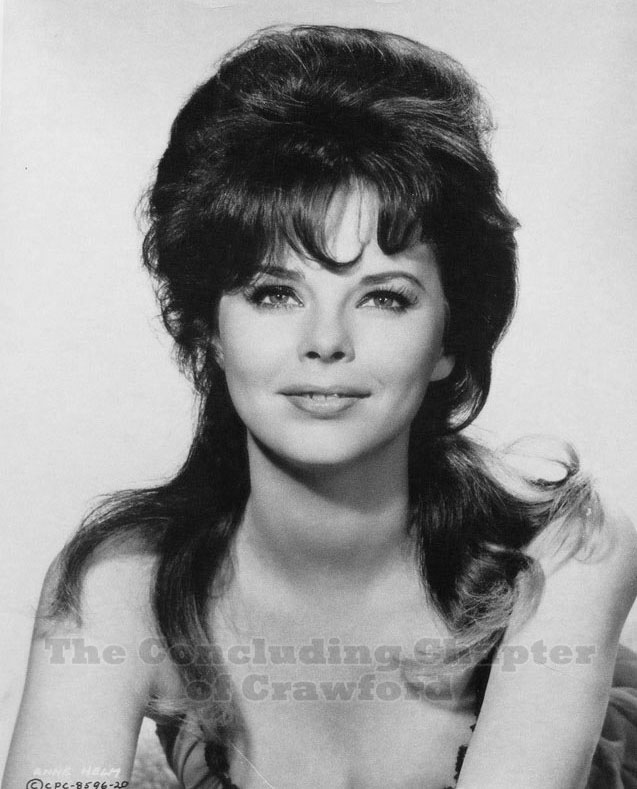 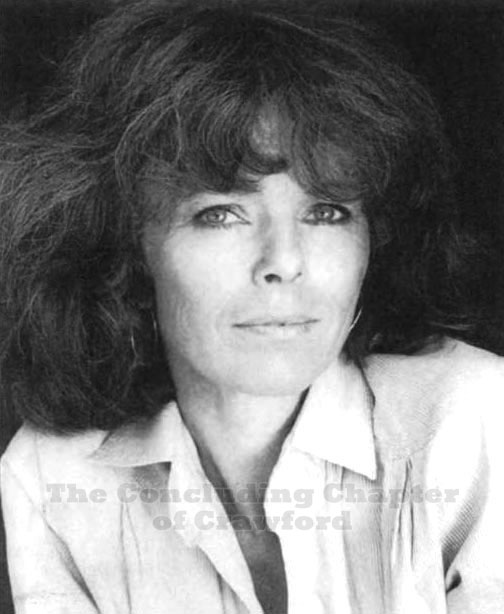 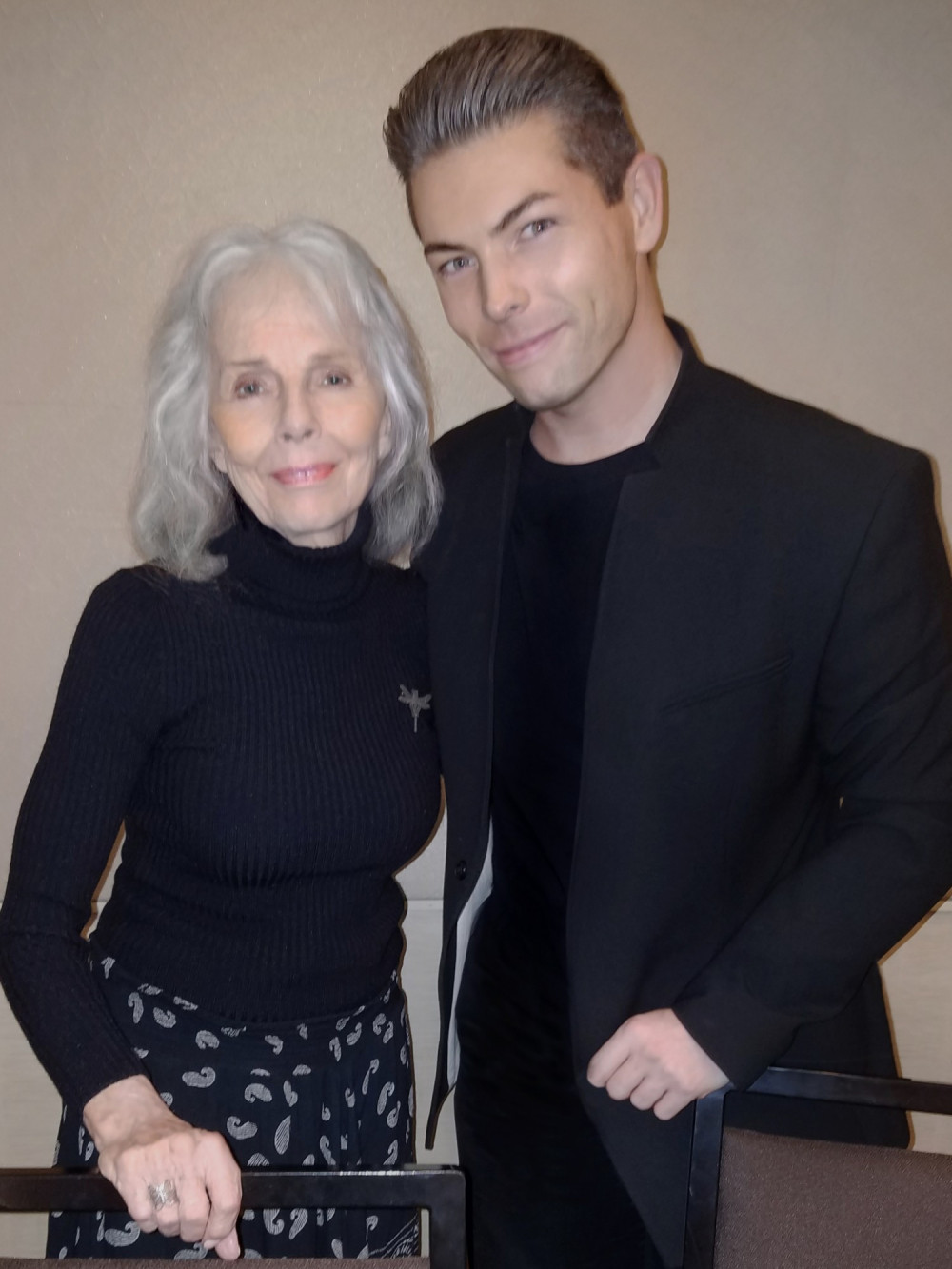 This Webmaster with actress Anne Helm (October 2018)
Copyright Notice
All original sources of the herein provided research material has been preserved by the webmaster.
Any desire for usage of the herein material in any literary publication, website or media distribution can be directed to the
webmaster at the following email address: BryanJohnson@TheConcludingChapterofCrawford.com