Film Synopsis:
When three explorers find the "missing link" in an English cave, local anthropologist,
Dr. Brockton(Crawford), attempts to study it while battling the local township, whom want to have the creature destroyed.

Production Details:
Producer Herman Cohen purchased the original story written by Peter Bryan and John Gilling in 1968, with filming scheduled to commence in November 1968 with a $2,500,000.00 budget.

Joan signed-on in May 1969 in the role of "Dr. Brockton. The role originally written as a male doctor.

Box Office:
(Paired as a double-Feature with "Taste The Blood of Dracula" after the September 23rd, 1970 premiere in New York, Los Angeles and selected cities)

"Three hours of British-made pseudo science fiction and horror, such as "Trog" and "Taste the Blood of Dracula" that drenched the screens of the DeMille and other houses yesterday in ersatz plots and gore, could conceivably encourage potential movie buffs to turn, say, to the charms of plumbing. This might not be a disservice since neither entry shocks entertainingly nor enlivens the ailing cause of the B-type thriller on the lower half of double bills.

There is, however, a rudimentary virtue in "Trog," a sort of second cousin, 15 years removed from "Creature From the Black Lagoon," in that it proves that Joan Crawford is grimly working at her craft. Unfortunately, the determined lady, who is fetching in a variety of chic pants suits and dresses, has little else going for her.

As the anthropologist chief of a research center that has unearthed a living, hairy, half-caveman half-ape, Ice Age "missing link," a troglodyte she cutely nicknames 'Trog' and attempts to rear as you would a backward child, she poses no threat either to Dr. Margaret Mead or Dr. Spock. Of course, there"s the villainous Michael Gough who goads the gentled 'Trog' 'into murdering several villagers, a rampage that leads to "Trog's' climactic destruction.

"I never expected this," one of Trog's discoverers exclaims. But thanks to a script that makes everything vapidly obvious from the start, 'Trog' is no more exciting or scientific than the antics of a rambunctious kid in a progressive school.

If anything, "Taste the Blood of Dracula" is as "scientific" and humorless as "Trog." Christopher Lee, as Dracula and an old hand in the horror trade ("The Hands of Orlac," "The Gorgon," "Dr. Fu Manchu," "Dracula," "Dracula Has Risen From the Grave") now is involved in dispatching three improper Victorians, who not only are averse to drinking his blood but also have killed one of his disciples.

Early in the creepy proceedings in a ruined church, one of the timorous trio whispers, "My God, I don't like this." He proves to be absolutely right." 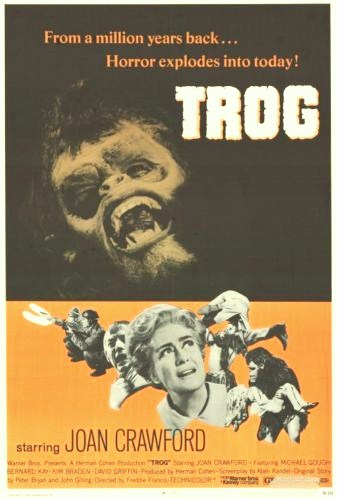