Joan Crawford, the celebrated Academy Award motion picture stat, will be here on May 6 for the dedication ceremonies of the new Pepsi-Cola Co. plant at 1423 N. Church Street to which the public is invited.

The ceremony – a week from Saturday – will bring together top Pepsi-Cola officials who will join the public at the dedication. Miss Crawford is a director of the Pepsi-Cola Co. and of Frito-Lay Inc.​
Other officials who will be here include James B. Somerall, the company’s president and C.E.O.; Samuel H. Desch, executive vice president, and John E. Repko, vice president and manager of field operations. All are from New York.
Dedication of the local plant will come at 10:30 a.m., according to Robert B. Smith, president of the Pepsi-Cola Bottling Co. of Burlington.
​
Following dedication ceremonies, the plant will be open for inspection by the public.
Free Pepsi and Frito-Lay products, gifts, prize drawings for picnic coolers and transistor radios, entertainment by local radio and television personalities and tours of the high speed bottling line are included in the highlights taking place at the public open house, and everyone is invited.
​
The facility consists of a modern red-brick office facade with plant walls of concrete construction.
​The plant is thoroughly modern, yet traditionally influenced to enhance its landscape setting. ​It will house a completely new bottling line, general offices, vending department offices, bottling, syrup and water treatment rooms.
The latest in industrial architecture, the new plant features the ultimate in automatic bottling machinery.
Occupying a site totaling five acres, the facility will be capable of producing over 168,000 bottles of Pepsi-Cola each eight-hour working day.
The franchise employees 57 people, and runs a fleet of 25 trucks. The facility represents an investment, including land, buildings and all equipment, of almost $1 million.

“Hello, I’m Joan Crawford!”
​Pepsi-Cola’s most celebrated ambassador extended her hand to the waiting reporters at a news conference this morning displaying plenty of charm and glamour that made her one of the world’s top movie stars.
“Please excuse my appearance,” smiled the visitor as she took her seat. “I came prepared for Southern spring sunshine. This cool weather made me resort to the dress I traveled in last night.”
In fact, Miss Crawford looked very chic in a toast linen shift topped with a matching jacket, lined in a silk print – “I designed it myself. I design all my own clothes.” Atop her upswept hairdo was a jaunty copy of a man’s fedora in matching straw. A massive pin of jade and gold with matching earrings provided accent.
​
Thus Joan Crawford came to Burlington for a two-day visit to mark the dedication of the new Pepsi-Cola Bottling Plant. The dedication will be held tomorrow at 10:30 a.m. followed by an open house.
​
Movie star or business executive?
​Miss Crawford was both as she spoke one minute of her latest movie role in “Berserk” and turned a moment later to confirm the latest figures on Pepsi consumption with James B. Somerall, president of Pepsi-Cola Co.
“It takes the same type of drive and determination, the same capacity and desire to learn, to be a successful businesswoman or a successful actress,” said the dynamic woman who has herself been outstanding in both fields.
​
An Academy Award winner for the title role of “Mildred Pierce,” she is known to her world-wide public as an outstanding motion picture actress and has an impressive background of success in three major entertainment medias – motion pictures, radio and television.
In private life she is a member of the board of directors of Pepsi-Cola Co., maintaining proper perspective between her family, her dramatic career and her role as director of one of the world’s major corporations.
“Miss Crawford is always ‘on the stage’ with Pepsi,” commented the company’s chief executive. “We open about 30 to 35 new plants a year and she attends well over half of the opening.”
“I flew from London for one opening.” Joan confirmed. “It was part of my contract for the picture to take a week off to open a Pepsi plant.”
The picture in question was “Berserk,” to be released in October. “It’s a wonderful story about the circus,” said the star. “And we had the ‘Scotland yard men’ in one scene drinking Pepsis.”

“Relax?” I don’t know what the word means,” said Miss Crawford. “I did three television shows – ‘Girl Talk’, 'Hollywood Palace’ and ‘Merv Griffin’ – in the space of a few days. Next Thursday I’m off to Mexico City for the opening of a Pepsi Plant. I’ll stop off in Los Angeles just long enough to replenish my wardrobe.”
“I enjoy all my work – and it’s good for Pepsi!”
“Joan is the most disciplined person I've ever known,” commented a Pepsi-Cola executive. “She makes every minute count.”
​
Now making her first visit to Burlington, Miss Crawford recalled that she’d been in the state twice before, in Charlotte and Raleigh.
​“I’m a Southern myself,” said the native of San Antonio, Texas. “I was at a dinner at Donna Reed’s house the other night in Hollywood and told her I was off to North Carolina. I pronounced the name of the state like a real Southerner and Donna chortled, ‘Listen, she’s packed her accent already.”

What about her favorite movie role?
​“Mildred Pierce,” of course, which brought her an Academy Award, then “Humoresque” and “Possessed” – “I think ‘Humoresque’ was one of the best jobs I've ever done.”

Her favorite leading man?
​“Gable – because of his great magic. Robert Taylor and James Stewart too…and Spencer Tracy also has that magic. I never did a picture with Cary Grant, but he also is a great leading man.”
One of the up and coming actors today is Bill Cosby – he’s one of the best actors I've ever seen.”

Do movie stars today have the same degree of glamour as stars of earlier years?
​“No,” said Miss Crawford. “Overexposure has removed much of the mystique. The public knows too much about them.”
​
Glamour or not, Miss Crawford is quick to inform listeners that she does all her own cooking – “I haven’t employed a cook in years.”
Pork chops and fried apples is her favorite dish – “Remember I’m kind of a Southerner myself.”
She does her own house cleaning, too, and has a broken foot to prove it.
​“I had just done ‘Girl Talk’ and ran home to clean the second bedroom and get ready for the painters I slipped on a drop cloth – and that was it!”

​Her next role?
​“I’m waiting for the right script,” smiled Joan. “And now, let’s talk some more about Pepsi!”

The Peps-Cola Co. focuses heavy attention on North Carolina, a fact attested to by the large number of top officials who came here for today’s dedication of the facilities of Pepsi-Cola Bottling Co. of Burlington.
James B. Somerall, president and chief executive officer of the company explained this interest in North Carolina yesterday at a news conference in which he and the actress Joan Crawford talked with the news media representatives.
​
North Carolina, he noted, is the home of Pepsi, having been the first developed in New Bern. Also, he added that Burlington’s original plant, built in 1939, was the first in the world for the exclusive purpose of bottling Pepsi.
North and South Carolina have the largest per capita consumption of Pepsi of any states in the union, he added.
​
Pepsi now has 530 franchises in the United States, he said, with about 540 plants in operation. "The company", he added, "is at the present time experiencing it’s greatest rate of growth, running about 50 percent ahead of the industry trend."
Latin America is one of the best areas for Pepsi in it’s international operation, he added.
​     “Our greatest growth opportunity lies in the South.” He stated. “Our per capita consumption grows yearly”, he added, suggesting that the growth in population is a big factor in the soft drink growth.
North Carolina’s consumption of Pepsi products is about 200 per capita per year.
Pepsi also has the Frito Lay Co. in its organization, and Mr. Somerall said the Lay potato ship now has become the first in the nation to be sold nationwide. Also, the company sells about 85 percent of the nations’ corn chips.
The firm is the second largest importer of olives through its Bell products organization.
​
Joan Crawford’s role with Pepsi officially is as a director, but she is far more than just another official of a corporation. She appears to be as busy, or even more so, than anyone in the company.
“Joan has made a great contribution to our business,” Mr. Somerall said.
She follows her acting career, but she says she always checks with Pepsi to see if she is needed before taking an acting assignment.
She seems quite pleased with her place in the business world, but she feels that women will not equal men in business. “They are not trained for business, while a man is geared for it much of his life,” she said.
Mr. Somerall quickly added , however, that many women are very successful in business, and that one of them has to be Joan Crawford.
​
While making a recent film in London, Miss Crawford once flew to Chicago for Pepsi business, staying one day and then went right back to London the next day.
On another occasion she took off a week from a movie to attend a Pepsi plant opening in Birmingham Alabama.
Some times of the year are busier than others for Miss Crawford in her work with Pepsi. “Ours is a seasonal drink”, she said, and during the seasonal break she has more opportunity for acting.
​
Even when she is on the stage, however, she still feels she is working for Pepsi.
“When I was on ‘Hollywood Palace’ recently”, she said, “I felt like it was an hour-long commercial for Pepsi”.
Miss Crawford and Mr. Somerall were joined in the news conference yesterday by Robert B. Smith, president of the local operation.
Also on hand was Bob Cox, a vice president of Pepsi who is well-known in this area as a member of the University of North Carolina football team during the Charlie Justice era. 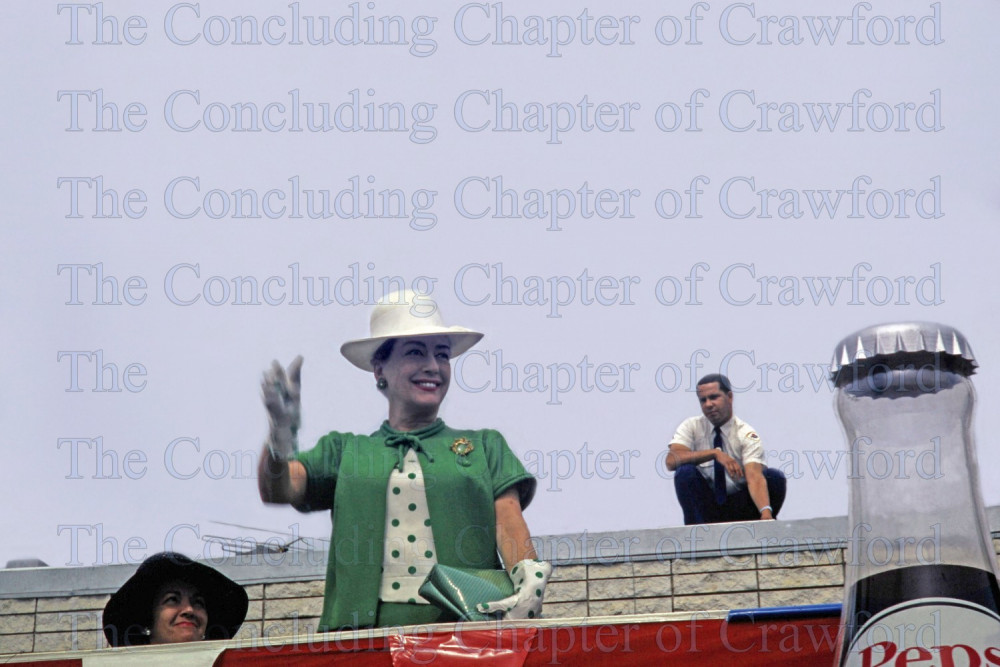 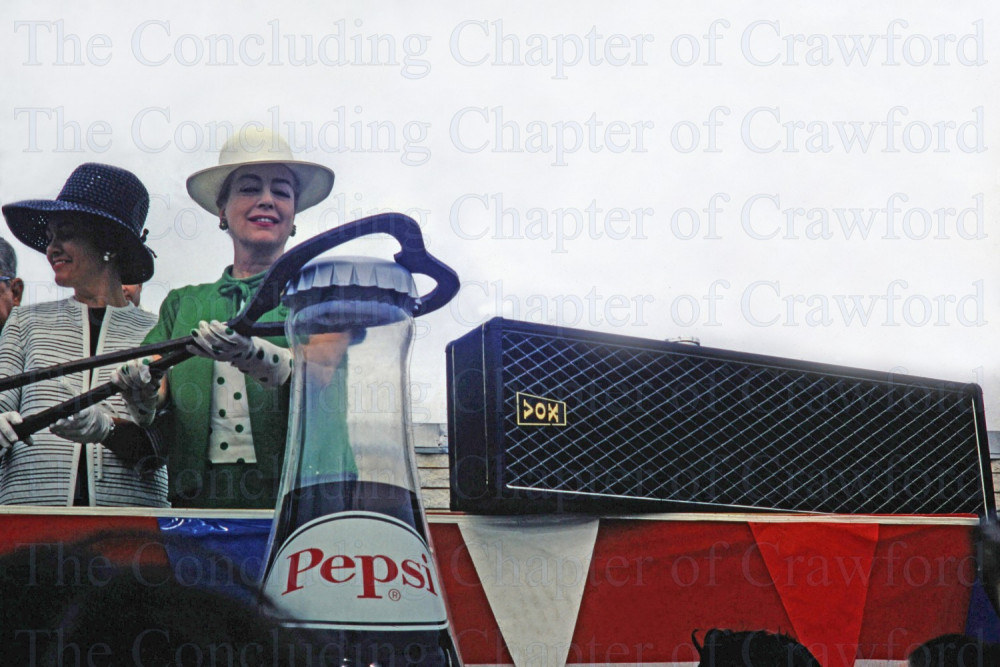 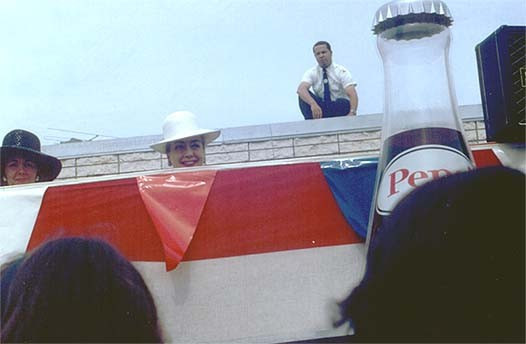 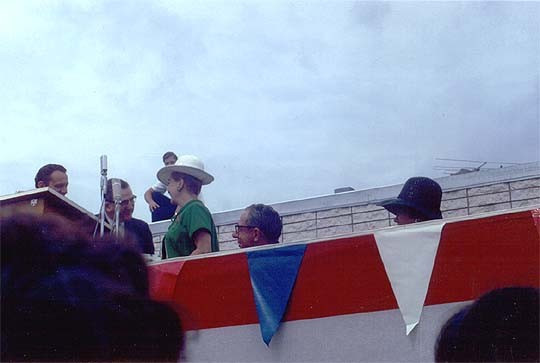